Welcome to the new home of Mr. Fish Comics, where you can find all the latest info on “GREENZONE: LIFE IN THE BLOCKS” coming to Kickstarter April 4th, 2022. 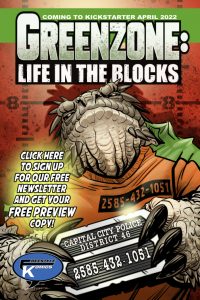 Click HERE to stay up to date on ALL things Greenzone so you don’t miss a single issue!

when you sign up for My newsletter, You will get a FREE preview copy of “Greenzone: Life In The Blocks” and a FREE copy of “T-Man & HyperStrike!”

In a world where anyone could be born with superpowers, genomes are viewed as walking weapons… supervillains waiting to happen. Cast out of society and forgotten, they are forced into Greenzones, and packed into super powered ghettos called “the Blocks”. The only hope for a better life is the Genome Citizenship Accords of 1968 which state “any genome that proves their worth by serving the greater good for a period of no less than five consecutive years, may earn their citizenship, right to vote, and right to own property…”   So, if you want to claw your way out of the blocks, and get a chance for a better life, you have to risk it all in either the military, fire department, or the police force. This is the story of three new recruits to the police force on their first shift in the G-unit. 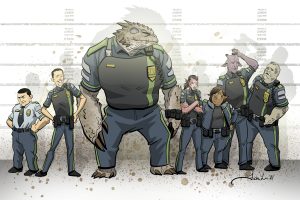 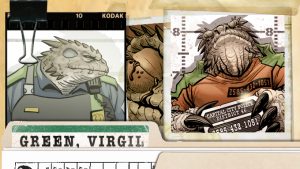 An orphan, Virgil has grown up completely alone in the blocks.  No one to look out for him, tend to his needs, and looking like a monster, he has always struggled.  Teased and tormented by his own kind, his life has been a living hell.  The only thing he hates more than the police is being trapped in the blocks, so he is risking his life for a chance out. 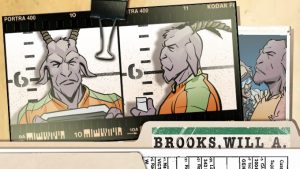 Growing up in Green Valley, the suburbs of the greenzone, Brooks was the star of the football team. Tall, strong, and popular, Brooks had his pick of opportunities to serve.  He was tempted to enlist in the Marines like his father before him… but the helmet requirements would have forced him to cut his beautiful antlers. 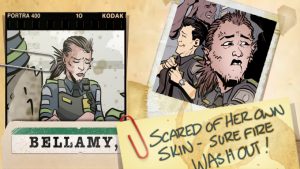 Covered head to toe in barbed quills, Bellamy is uncomfortable in her own skin.  She is constantly on edge, because accidentally bumping into someone on the bus could get her an unlawful use of supernatural force charge.  She is obviously apprehensive around other genomes, and feels completely out of her depth in the police academy… but she is in control of her life for the first time, and this was the best plan she could come up with. 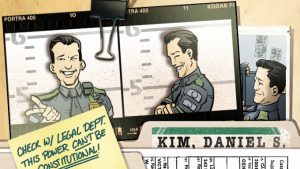 Danny Kim is a second generation career police officer, his father has proudly served on the force for over 20 years.  Danny has grown up easy, with his father paving the way he has had everything handed to him. Being able to pass for human, he can easily slip in and out of the greenzone without issue.  He doesn’t fully realize how different his privileged life has been from his trainee, Virgil.

In 2018 Mr Fish introduced “T-Man & HyperStrike!” to the world and had an awesome response, selling over 400 issues in the first year!   After such a great response, Mr Fish was swamped with offers to illustrate numerous other indie books… penciling, inking, lettering, and coloring over 30 books in the years since.  Highly sought after for his dynamic art, his mastery of emotion, and his skillful storytelling, he’s often booked up for a year in advance on books like “The Power Company”, “Kevin Terry Is Fivestar”, and “The Sentinels”. Now that he has signed with Freestyle Komics, he has the time to get back to telling his own stories, and the new ongoing series “Greenzone: Life In The Blocks” is a story he has been dying to tell for years.  This gritty, complex, heart wrenching world is RIPE with amazing storytelling opportunities, and we can promise, you will LOVE every minute of it!

From the creators of Hotshot, Vigilance, Heroes International, Cypher, Emerald Quest, the Chat and Draw art books, and Fivestar comes the next BIG title from Freestyle Komics and Mr Fish Comics! Greenzone is a fresh new series from the mind of Mr Fish Lee, and takes place in its own universe, separate from the Hotshot Verse, but not completely disconnected.  Greenzone will be the 27th amazing comic from publishing powerhouse Freestyle Komics!

use discount code “greenzone” for 10% OFF anything in the store when you shop at FSKNOW.com for the hottest titles in indie comics!